A model for what is possible in teaching and learning, Rawson Saunders is the leading institution in dyslexia education that empowers, equips, and inspires students to become confident lifelong learners and extraordinary contributors to our world. 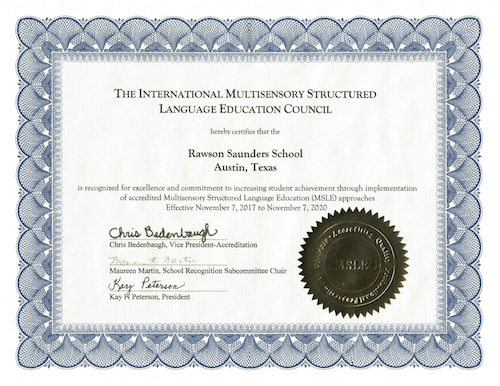 Rawson Saunders School is one of the first schools in the nation to be recognized for "excellence and commitment to increasing student achievement through implementation of accredited Multisensory Structured Language Education" by the International Multisensory Structured Language Education Council (IMSLEC). Rawson Saunders was also selected by the National Association of Special Education Teachers (NASET) as a NASET School of Excellence. This honor is presented to private special education schools that meet rigorous professional criteria and have demonstrated truly exceptional dedication, commitment, and achievement in the field of special education.

Families come from all over the greater Austin area, neighboring towns, and well beyond. A number of our families traveled from locations across the country and even the world to relocate to Austin to provide their child with a Rawson Saunders education. 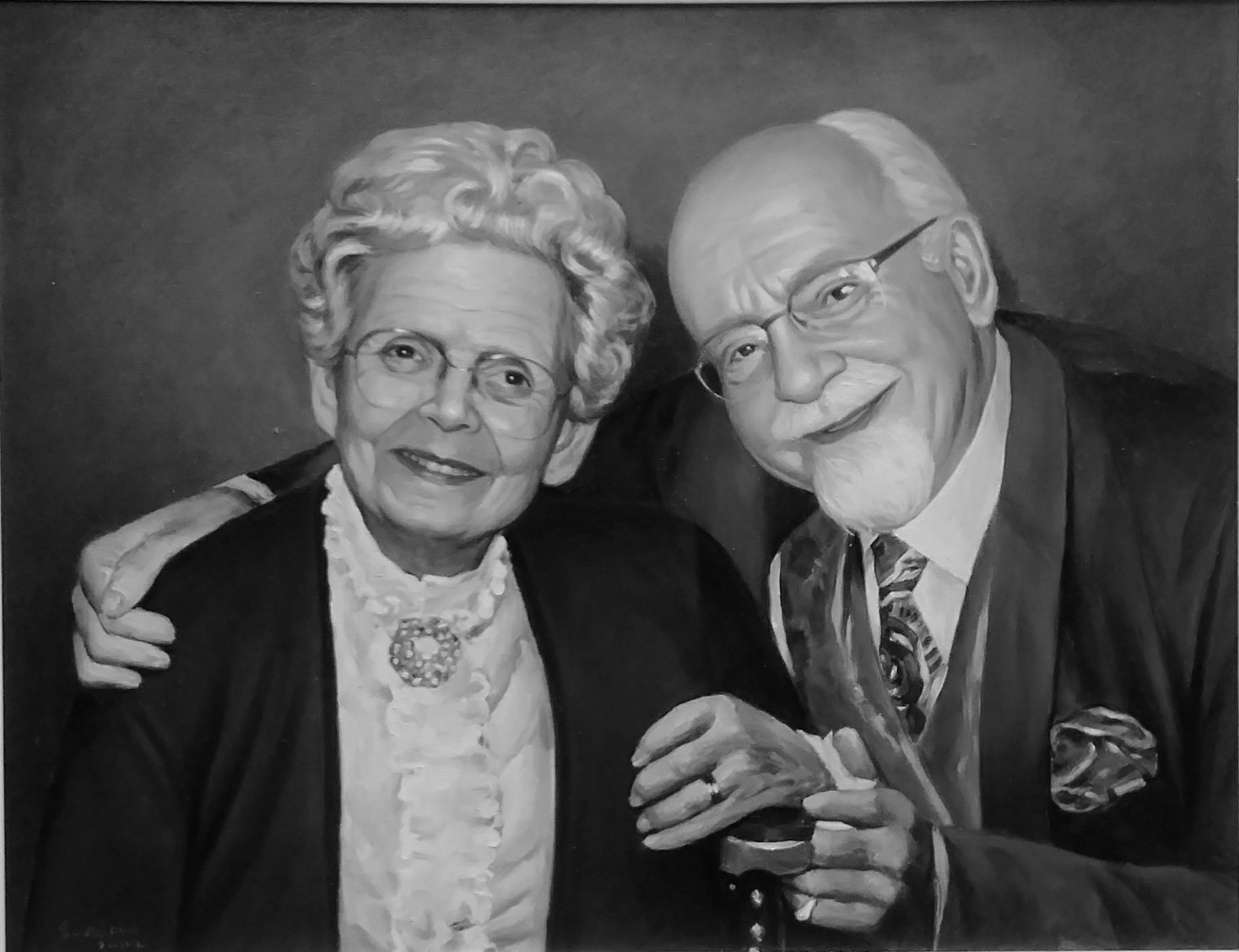 Rawson Saunders was established in 1997 by a consortium of educators and parents determined to fill the need for a new, innovative school in which dyslexic students could thrive. Margaret Byrd Rawson (1899-2001) and Roger E. Saunders (1924-2006), preeminent pioneers in the research, diagnosis, and treatment of dyslexia, graciously lent their names and support to the new school. Both were instrumental in the founding of what now is known as the International Dyslexia Association, formerly the Orton Society. Margaret was the Orton Society's national president through the 1960s. She worked closely with Dr. Samuel T. Orton, who identified dyslexia as a medical diagnosis in 1925 and who co-founded the Orton-Gillingham research-proven teaching methods for dyslexic students that Rawson Saunders uses to this day. Margaret wrote nine books and countless articles on dyslexia. She remained an authority on dyslexia and tireless advocate of dyslexia awareness until her death in 2001 at the age of 102. Roger Saunders was a psychologist, dyslexia expert, and dyslexia awareness advocate who sought to educate teachers, parents, and students that dyslexia was neurological and not an emotional or intelligence issue as was previously believed. Roger had studied under June Orton, widow of Samuel T. Orton, and served as the president of the International Dyslexia Association for six years in the 1970s. He made several visits to the Rawson Saunders school in its early development to help shape its mission, and also worked to further dyslexia awareness in the Austin area.

The Board of Trustees generously volunteer their time and talents for the benefit of this and future generations of Rawson Saunders students.

Rawson Saunders School values the beautiful diversity of our community and of our world, and does not discriminate on the basis of race, ethnicity, gender, religion, sexual orientation, or national origin. In addition, Rawson Saunders seeks to provide a superior education to students of all socio-economic backgrounds. Rawson Saunders is strongly committed to an inclusive environment which honors the uniqueness of each individual's background, values, and point of view. Visit the Rawson Saunders DEI Diversity, Equity, and Inclusion page.

Rawson Saunders is committed to making this website accessible to visitors with disabilities and is continually working to increase its accessibility and usability.

https://www.rawsonsaunders.org strives to conform to Web Content Accessibility Guidelines 2.0, Level AA. These recommendations outline how to make website content accessible to a wider range of people with disabilities. We are on a regular basis seeking opportunities to bring all areas of the site up to the same level of overall web accessibility.

If for any reason you cannot access any of the material on our website, please email communications@rawsonsaunders.org and we will work to resolve the problem as soon as possible.

5th grade students have the opportunity to participate in our after school sports programs—cross country, flag football, volleyball, basketball, and soccer—competing with other local private schools 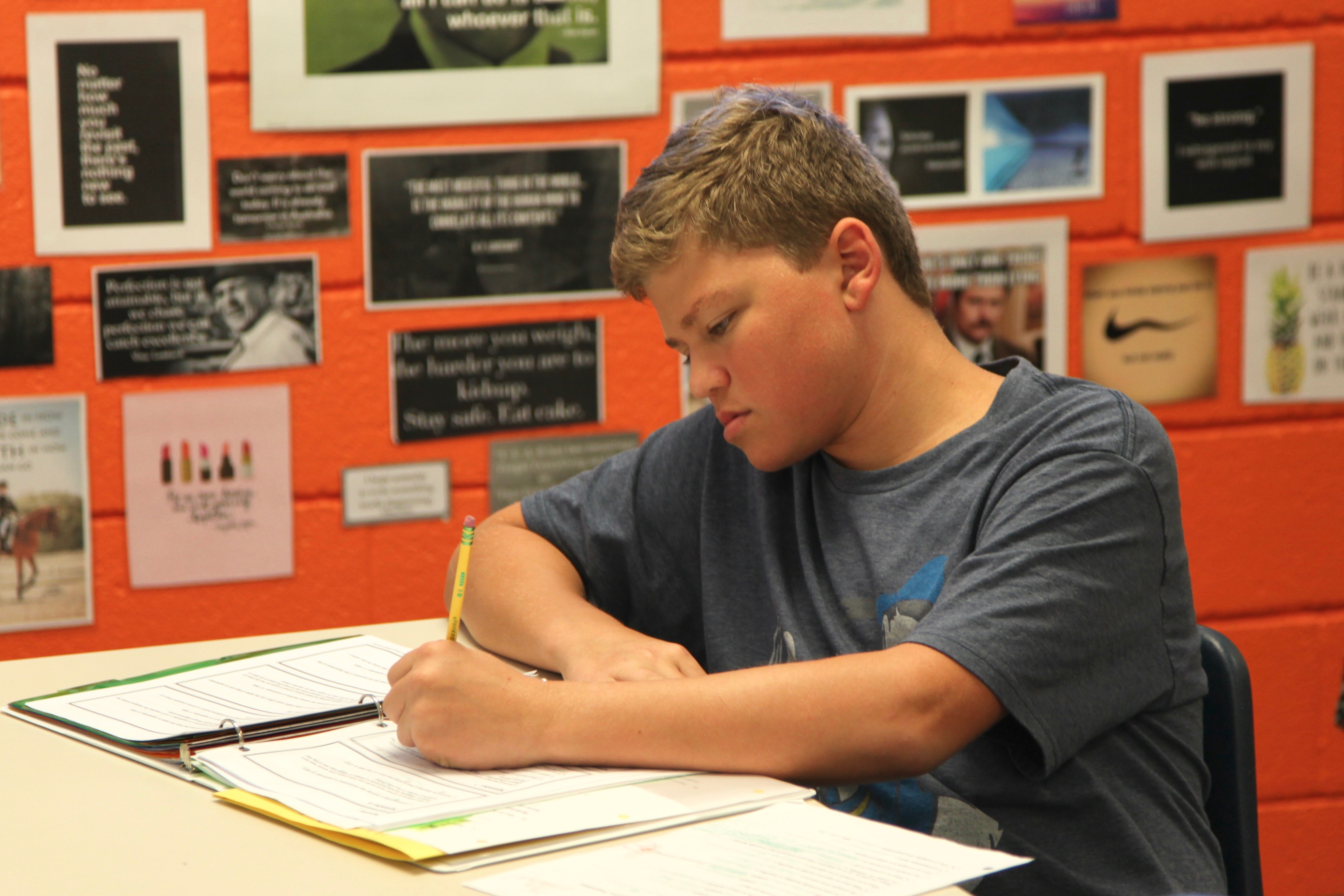 Students in grades 5-8 have the opportunity to participate in our after-school sports teams which compete against other local private schools.

The choice of in-school PE or Yoga is offered to middle school students.

Middle school students have the option to audition for roles in the school play, which is performed in a public venue each year, alternating between large all-school productions and smaller "black box" shows, as well as PSIA one-act competitions. Students also make up the crew.

LEARN MORE ABOUT OUR THEATRE AND ARTS PROGRAMS!

Middle School students are offered a dynamic choice of electives each semester, which are based on students' interests and teacher expertise. Offerings include:

The Upper School provides a well-rounded curriculum designed to prepare students for the rigors and requirements of college, including essential study skills and self-advocacy.

Rawson Saunders teachers are mentors who work with each student to provide support and foster strengths.

A continuation of daily ALT, if needed—LEARN MORE ABOUT ALT!

Upper School students have the opportunity to join Cross Country and compete against other local private high schools.

The Upper School athletics program is in development with more options available soon!

A school in Austin you might not have heard of is @RawsonSaunders (TAPPS school billed as full-curriculum school for dyslexic students in grades 1-12). Senior Owen Mielke (center) finished 11th at TAPPS state XC meet. Congrats from @statesman
#centexpreps pic.twitter.com/6r1DvSNaeO

Our RS journey has been incredible. Our child has completely blossomed here, academically, socially, and emotionally. The personalized attention, the attention to detail, the creative and fun multisensory learning, the thoughtful guidance, the highly professional assistive technology support, the engaging extracurriculars, the ease of regular and drop-in aftercare, the excellent communication with parents, even the delicious organic and locally sourced lunches… I could go on and on. It has been a magical journey for both student and parents here. And it is all due to incredibly smart and caring educators, Academic Language Therapists, administrators, coaches, and support staff who are committed to and are successful in achieving excellence in the education of dyslexic children. Thank you for everything, Rawson Saunders!

110% wonderful in every way. My son will graduate from 8th grade full of confidence, happy, with lasting friendships, both peer and adult. His self-esteem with reading was recovered with excellent, patient ALTs. RS allowed him to enjoy other courses without worry about reading issues, as mastery could be demonstrated in non-text ways. The theatre program was a game-changer and expanded his world in numerous ways, both with theatre skills, friendships, and the social-emotional learning that came with the choices of productions. Encouraging and caring sports coaches allowed him to try sports new to him in a safe environment and the sports have turned out to become significant in his life. RS truly cared about my child as an individual and helped him blossom in numerous ways. He graduates from middle school happy, confident, informed and—this is big—unashamed about his dyslexia, able to advocate for himself, and able to appreciate the strengths it brings to his life.

Rawson Saunders truly changed her life. The faculty and staff equipped her to succeed academically and equipped her with the skills she needs to advocate for herself. You showed her that she is smart and talented. You imbued her with confidence and helped her find happiness in school, something that had not been possible before Rawson Saunders.

Rawson Saunders has been a complete game-changer for our family, and of course for our son in particular. It is truly everything you’ve heard and more. There is something magical about the community, and I suppose it is that we’re all here because we have this significant experience in common. We’re all bonded from day one. All of the kids have shared the same reading struggle, and all of the parents have experienced the same struggle trying to help their kids. Everyone is so relieved to be at RS and to find each other and the help they need. Everyone can exhale. The staff is experienced, sensitive, patient, caring, and organized. I can tell you that they truly change lives.

Rawson Saunders is truly a lifeline for my son— academically, athletically and socially. He is growing into a confident outstanding young man thanks in no small part to the exceptional environment that Rawson Saunders has created for dyslexic learners like him.

We so appreciate all the support and guidance our daughter has received at Rawson Saunders. She has grown and learned so much in her time here already. Thank you so much for the multitude of ways you've all encouraged and challenged her.

Rawson Saunders has changed the trajectory for our family and for our son. I am confident that he now possesses the skills to develop into his full potential. It has by far been the best investment we have ever made.

In this magic place you unlock the secret of words. But more than that, you help them touch their own humanity. They go from children who are wounded and need help to the ones who bend and stoop and stop to help. You have cultivated a culture of kindness.

It's been life-changing for our family! Our daughter has grown into a confident scholar who's ready to spread her wings. I attribute her success to her hard work and to Rawson Saunders' amazing, supportive teachers.

The benefits to having skilled educators combined with a classroom of only dyslexic students cannot be overstated—it is like a magic potion for kids. My kiddo is above grade level for math, and working toward grade level in reading (a miracle). She is genuinely happy in a way I just have to appreciate and admire.

We have loved our Rawson Saunders experience!!! Our daughter has learned so much about how to be a scholar and shrewd thinker, how to navigate the world and assimilate without compromising her own viewpoint. We are so thankful for the efforts that the teachers and staff put into our children!!!

Rawson Saunders will always have a special place in our hearts as the school that taught us that our son's disadvantages are actually advantages.  He is proud of who he is and knows he is capable of so much. Thank you to the administrators, the talented and caring teachers, and the close friends that make up our Rawson Saunders family.

Thank you for giving our daughter this amazing experience. She has thrived with you, and she has gained a confidence in her learning and ideas that has been remarkable to watch. We will be forever grateful for your dedication to these amazing students.

As with her older brother, Rawson Saunders has had a life-changing positive impact on our daughter's self-esteem, confidence, and growth. We will always be thankful.

It's been a true gift and we'll always be grateful that Rawson Saunders got our son to this point where he's a confident, enthusiastic learner.

We are so grateful for our time at Rawson Saunders. It's a beautiful school, filled with lovely teachers, staff and students. Thank you for all you did for our family.

We've had an incredible experience and couldn't be more proud of the growth and support offered.

Rawson Saunders was an amazing experience for my son. It gave him the tools and the confidence to engage in his education.

Rawson Saunders has been a blessing to both our boy and us, his parents. We will always be grateful for the love and personal attention he has received.

So grateful for all the academic growth and loving teachers. Will always treasure our years at Rawson Saunders.

Rawson Saunders has made a world of difference in our lives.

Rawson Saunders has been a blessing beyond words.